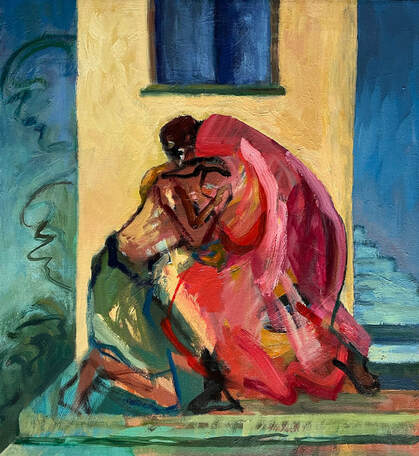 The Prodigal Son, 2022 Oil on canvas, 21x19"
About five years ago, I found myself enthralled by a book of Rembrandt's drawings and etchings of Bible stories.  I was struck by the power of these black and white images.  I decided to make a series of full color paintings inspired by these works.

My paintings depict situations in which the extraordinary is slipping - or crashing - into the ordinary. Many include angels. To capture these moments, I borrowed Rembrandt's Baroque compositions. (many diagonals).  Transforming his gorgeous gradations of black, white and gray into full color offered a challenge, and I often leaned on some of my favorite modernists for help -- Matisse,
Bonnard, Avery.  In an effort to get at the poignancy and gravity of these encounters, I have often felt the need to paint several versions of a scene.  They range from naturalistic to expressionistic and abstract.

All two-dimensional art is abstract to some extent.  I will always be a sucker for the magic created when marks applied to a surface manage to represent physical space.  But my real delight comes from art that combines that magic with the expressive power of the marks themselves.  I agree with Matisse who said, " The power of  painting should strike the viewer before the subject matter is recognized."  This explains why we painters sometimes turn our paintings upside down while working on them.

For most of my life I have been a church-going Christian.  I have read and studied the Bible, both the Hebrew scriptures and the New Testament.  And I have discovered that when you read the Bible regularly, as Rembrandt assuredly did - one third of his works depict Bible subjects - the stories resonate more and more with timeless issues:  Am I responsible for my neighbor? Who is my neighbor?  Where does evil come from?  Are peace and justice hopeless ideals?

SOME THOUGHTS ON LANDSCAPE PAINTING 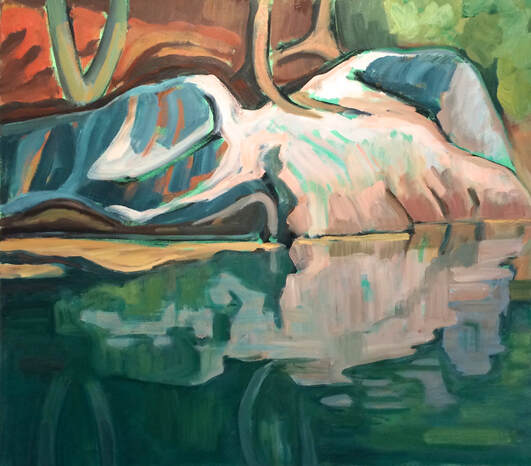 Seal Cove Shore, oil on canvas, 32x36
The wonderful thing about landscape is that it surrounds you, bombarding not just your eyes, but your skin, your ears and your nose.  I used to paint landscapes only during the summer – scenic views, often, when in Maine, from a small boat. The rest of the year I pursued human subjects – groups of masked party-goers, refugees; then I turned to animals: a riff on the Etruscan Wolf that suckled Romulus and Remus, followed by a lot of dog paintings.

When I took up landscape painting full-time, I was no longer interested in capturing scenic views.  I wanted to invigorate my painting process, to wake up my senses. I was attracted to locations that I think of as confrontational (often without any horizon or sky) and seemingly involved in some kind of drama enacted by the forces of nature.

In addition to small on-site studies, I used photographs.  I use photos with some trepidation because they have a way of flattening shadows, as well as dulling edges, color and light.  But I like to think that I can exploit this innate poverty of my photographic images, by using it as a spur to explore the expressive possibilities of the paint marks themselves. 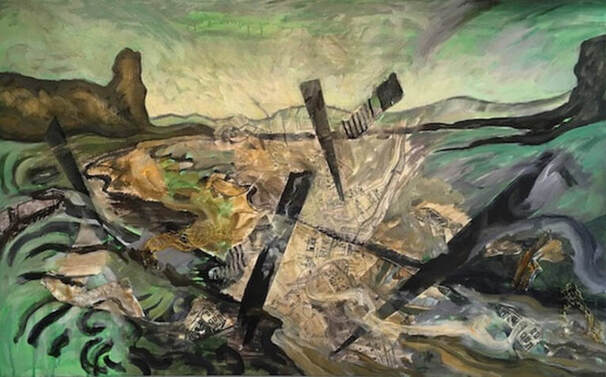 Mill River Disaster of 1874, 2018 Mixed mediums, 24x48
I have lived for 45 years beside the Mill River in Williamsburg MA.  I have often thought about that rainy day, May 16, 1874, when a shoddily built earthen dam burst, releasing its entire contents into the valley below.  139 people died and many homes and 67 mills were destroyed in the villages of Williamsburg, Skinnerville, Haydenville and Leeds.
Reading Elizabeth Sharpe's book, In the Shadow of the Dam, moved me to do my own research in local archives, and to eventually do drawings and paintings that I think of as an elegy to those who suffered.

I became quite fascinated by the strange forms that the torrent of water created.  I mostly limited myself to earth colors (black, white, yellow ochre, burnt sienna) which seemed appropriate for images of devastation.  I love working with this minor key palette, squeezing greens from yellow ochre and black, and violets from black and burnt sienna. In this muted world, grays appear amazingly blue!

It was the mill owners' greed and recklessness that let to the dam's failure, and we are bound to see similarities in today's world, where we routinely hear of little people suffering for the sake of profit for the powerful.

In this case, as Elizabeth Sharpe once said in a lecture*, "the question we come away with is: why did those normally intelligent and civic minded businessmen commit this gross act of negligence, which devastated their own families and fortunes as well as those of their neighbors?"

Making a Mural in Burundi 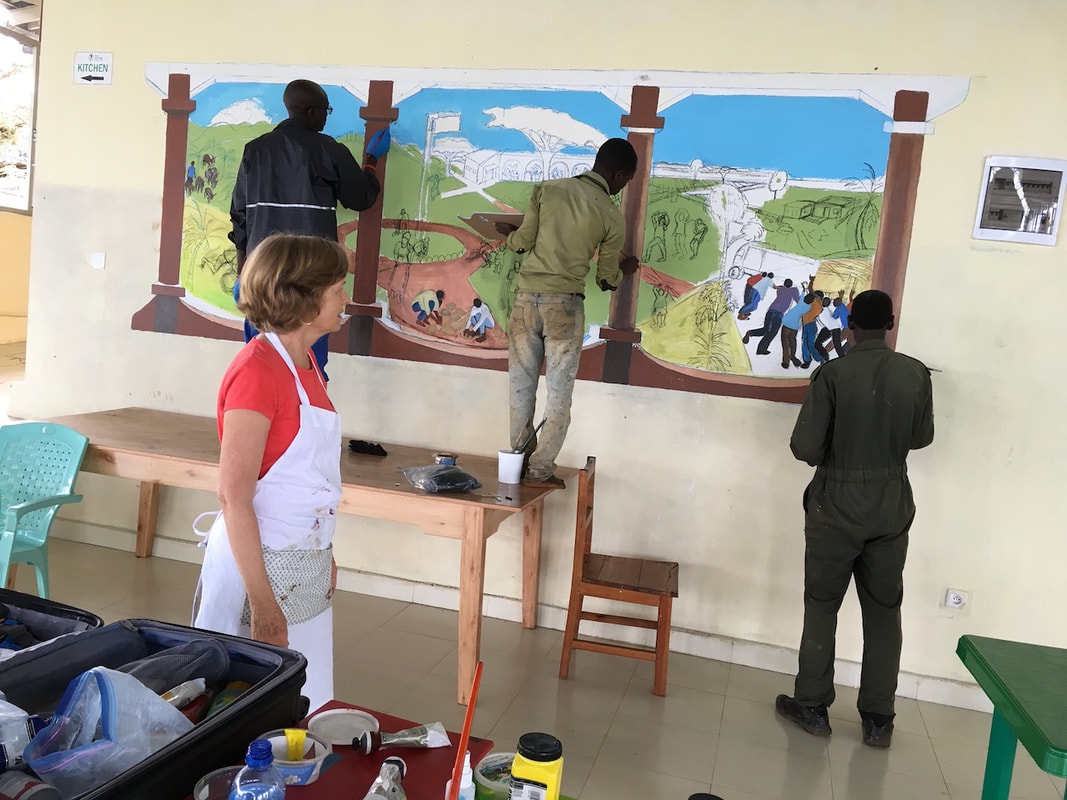 My three helpers, Clement, Christophe and Protais, working on the "architecture".

​
The mural tells the story of how the men, women, and children of the village came together, and using their farm tools, but mostly their bare hands (and heads), built a road and cleared land for a much needed health clinic. You can read the background story in my husband Tracy's book "Strength in What Remains".

Burundi has suffered many years of civil war and is still plagued with political and economic instability.  In this setting of extreme poverty VHW treats 100,000 patients a year - people of both ethnic groups, who, less than a generation ago, were at war.

I created the mural on a long sheet of paper in my western MA studio. Deogratias Niyizonkiza, the founder of VHW, shared photos with me that he had taken of the villagers hoeing, carrying rocks, bricks, etc. I drew figures based on those photos and designed a panoramic setting for them, incorporating actual features such as distinctive hills and Lake Tanganyika. The early clinic (today expanded into a full service hospital) is represented schematically (in the upper middle right of the mural); and five sections reveal the health care going on inside.

It is a trip of 60 miles on bad roads from the capital of Bujumbura to Kigutu. Since it is difficult to get supplies there, I brought everything with me: acrylic paints, brushes, rags, tape, a chalkline, tape measure, charcoal, yogurt containers and six photographic repros of different sections of the original paper mural, which I left back home in my studio.  My helpers were two men from the maintenance crew, Clement and Protais, who had experience painting walls.  A third helper, 20 year old Christophe, had recently come to Kigutu looking for a job, but had only found part-time work.  He had learned some art skills, and turned out to be of invaluable help with the mural.

I began by blocking in the large shapes on the wall with the help of a mini digital projector (which proved useless thereafter because I had no tripod). Next, I painted the sky blue and the earth green with latex house paint. Then, with charcoal, I drew the columns, the figures, trees, buildings, and clouds.  At this point, I was joined by my three helpers who painted the architectural framing elements a basic brown. Since subsequent tasks called for more specialized painting skills, Clement and Protais went back to their regular jobs, and Christophe and I continued on. We made a good team. Christophe worked hard and was eager to learn more about painting. He evidently impressed those in authority because, soon thereafter, he was given a full time job.

I have travelled to Burundi three times, and I hope to return some day to this beautiful, troubled country to see the marvelous work being done by Village Health Works.  In the meantime, I will contribute financially to their cause. For more information visit villagehealthworks.org.

Christophe and I discussing how to paint some trees.